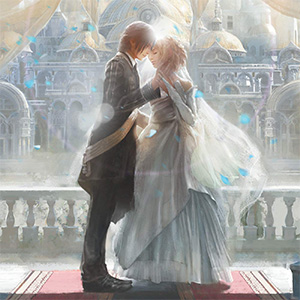 The novel “Final Fantasy XV -The Dawn of the Future-” was published in Japanese in 2019 and in English in 2020. It includes four DLCs (Downloadable Content, i.e. extra downloadable content) for the game Final Fantasy XV as a narrated story. Unfortunately, three of the four DLCs were no longer released as game expansions for the PS4 main game. In this post I would like to go into how important the book is for the entire universe of the game and what a pity it is that its contents could no longer be published in one context. But the drama begins with the game’s universe as such, which is why I want to address this issue first.

The universe of Final Fantasy XV – A Curse

Although Final Fantasy XV can actually shine with a very successful story and good staging, it is not exactly one of the most popular Final Fantasy parts. In fact, it’s quite controversial. On the one hand, this is due to the approach of incorporating an open world with quests into the game. As a result, there was a very strong fluctuation in the quality of graphics and dialogue. But what has probably caused even more resentment is the infinitely large media universe into which Final Fantasy XV was split. For this I have created a table that should show roughly chronologically which franchises were created around this part of the series.

With so many titles, Final Fantasy VII could almost be jealous. Other games and novels have also been published for this (see the book review contribution: “Final Fantasy VII: The Kids are alright: A Turks side quest”). The clear difference to the seventh part of the series, however, is that the story was also finished there with the main game. Unfortunately, this is not the case with Final Fantasy XV. If you have played through the main game here, you will come to an end, but you will probably not understand many of the events or will even be left at a loss. It is also not at all obvious which of the many titles make a meaningful contribution to the story and which ones can safely be ignored. The mobile games are usually completely irrelevant to the main story and are more like Easter eggs. On the other hand, the DLC episodes, the anime episodes and the CGI film are almost mandatory media if you want to understand the complete plot. Unfortunately, the overall story itself wasn’t really brought to a “satisfactory” end. This is because the last medium for the game was released in 2018 with “Episode Ardyn”. While this DLC was a success, it was originally intended to be a series of four episodes, collectively dubbed “The Dawn of the Future.” However, this project was canceled because the work on other franchises at SquareEnix, such as “Final Fantasy VII: Remake” or “Kingdom Hearts 3”, was more important. Almost two years later, the four episodes were published as a novel. This should now show which true ending was intended for the protagonists.

The book consists of around 400 pages, with the last few pages showing a total of 15 unreleased color artworks with comments intended to reiterate the plans behind the failed DLCs. The book itself still has a cover with the front showing Noctis and Lunafreya as a wedding couple, while the back shows King Regis and Commander Ravus.

Not much can be said about the writing style itself, which is why I only want to dedicate this paragraph to it. The four chapters on Ardyn, Aranea, Lunafreya and Noctis are all quite good and understandable to read, at least if you already know the background of the characters from the main game and the other media. Only Ardyn’s sections are a bit more difficult to read, at least if English is not your first language. Ardyn often speaks in a very old English, which is otherwise only known from classics such as “Alice’s Adventures in Wonderland”. This should probably clarify which age this character actually comes from. But if you’ve seen the anime episode beforehand or played the latest DLC, everything is still quite understandable because it’s mostly the same content. In general, however, it can be said (and this is also supported by the illustrations and comments at the end of the book) that some passages can be read more like playful combat passages. Of course, the chapters were intended to be DLCs for the game, which makes some passages less interesting (like Ardyn having to destroy 12 signal towers to weaken the force field, fighting various Guardians in the process).

In the following section I would like to go into why the book is so important for the Final Fantasy XV universe and to go into the story. I won’t spoil the ending, but I will go into different parts of the chapters and what was consciously or unconsciously missing from the actual main game. So if you want to be completely surprised, you should just jump straight to the conclusion.

Spoiler
Although the main game of Final Fantasy XV presents a story that primarily depicts the wonderful bond between four friends, the question you might end up asking is: was it all fate now? From the beginning (that is, even in the reign of King Regis) it is clear that Prince Noctis must one day sacrifice himself for the world. He has the task of defeating Ardyn in both worlds and thus eradicating the astral plague forever. This also happens at the end of the game, causing Noctis to meet his tragic end and thus was only a “pawn of the gods”. Of course, this end is beautifully staged by the long journey with Prompto, Gladius and Ignis… but at the end of a Final Fantasy part, don’t you fight against the gods themselves to end fate, the eternal bitter cycle? And what is the role of the mercenary Aranea and the medium Lunafreya, who have become practically irrelevant in the main storyline of the game?
These questions should be answered in the novel. Aranea travels back to her homeland, where she rescues and takes care of the girl Sol. After the time jump, Sol helps the newly awakened Lunafreya, similar to Noctis, to find her way in the world shrouded in darkness. Lunafreya recognizes the bitter fate of Noctis and wants to help him save the world without his sacrifice. This creates many new twists (which I don’t want to go into detail here) and the plot leads to an ending that is more fitting for a Final Fantasy game. In fact, all open questions are clarified by the book and thus all published media are brought to a conclusion.

In short, the novel should be a must-read for anyone who has played the main game of Final Fantasy XV, and perhaps consumed other related media as well. Its better explanation of neglected characters from the main game and the unexpected new turning points also make it easy to forgive that some passages read more like game mechanics than really like a novel.

A blog about traveling, cats and food… not necessarily in that order.